The House
​A short story collection. 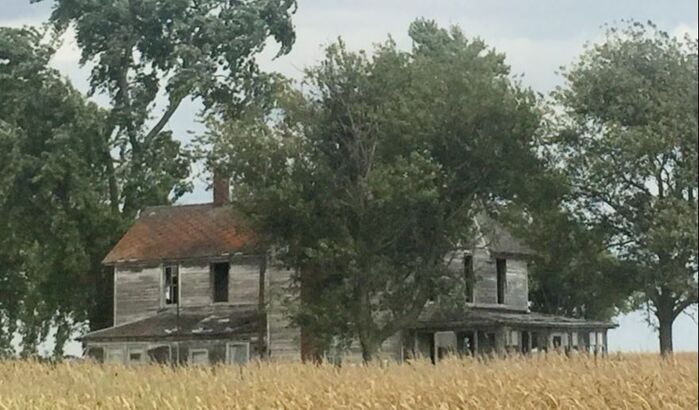 Homestead
by Nick Dalrymple October 4, 2019
When you left I began to die.

​Several generations ago I was born. The first family cleared the land and built a simple log cabin, but every new generation wanted more, deserved more and, through hard work could afford more. Eventually truck loads of fresh lumber begin to arrive. Soon, with much hammering, sawing, painting and all the other things that are found in a 1900 clapboard farm house were complete. I was full of music, running children and joy. As I grew I began to understand my world. As men began to hammer my parts together, filling openings with glass or doors, I became aware. I grew every generation. I was proud.

There was a day when flowers grew and children played. New white paint protected me, my glass sparkled. I was loved and I loved. Then you, Betty and the kids decided to move to the city for a better life, but better for who?

The renters didn’t have the time, money or skill to take care of me; and soon I wasn’t able to take care of them. Crayon scribbles were left on the walls. A cracked window was patched with scotch tape. The tape yellowed and began to peel away and water began to leak in. Bacteria and mold ate away at my window sills. That winter on that coldest night the furnace quit and the pipes froze. The people packed up what little they had and moved in with her mother on the other side of the state.

A few summers later two teenage boys went exploring. They found it easy to enter through my rotting back door. Inside they found a musty, mouse riddled couch (Not too bad with a blanket tossed over it.), a few rickety chairs and a scared table. The older boy decided the refrigerator would make a fine icebox. They were almost ready to share their find. The next Saturday night kids began driving up and parking in my yard, leaving ruts in the ground softened from recent rains. They came in ones and twos and by the car load, carrying their six packs and Boone Farms wine.

It was fine again hearing music and laughter throughout my many rooms. These may be people that can help me and in return I can bring them joy.

As the night wore on the kids began to leave until only two were left. As they walked toward the door, the older one flicked his cigarette butt to the corner, landing in dried leaves, dust balls and assorted nest material. As they drove away I smelled smoke and then there was a deep red glow, quickly brightening and climbing up the wall.

My last thought was no one lives forever and I collapsed to the ground exhaling my last breath of smoke and dust.